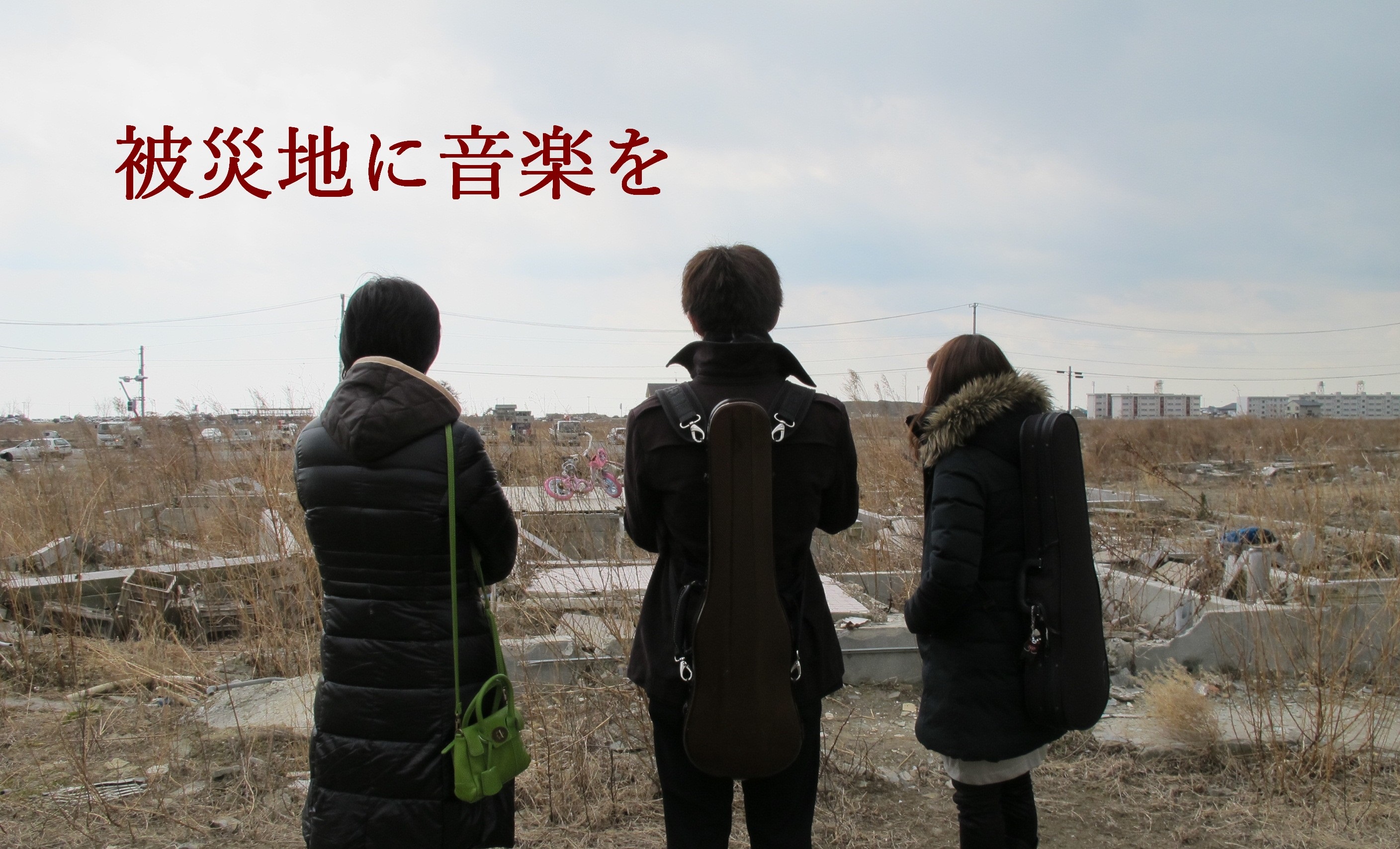 After The Great East Japan Earthquake and tsunami happened in 2011, Japan Philharmonic Orchestra have held 263 times of musical activities in the affected areas of the northeast region to support the people and the communities.

On the 11th of March 2011, estimated 16,000 lives were claimed and more than 120,000 houses collapsed by the earthquake, and the tsunami triggered a disaster at the Fukushima Daiichi Nuclear Power Station. More than 20,000 people are still forced to evacuate from their hometowns: the disaster has severely affected their lives.

We are sincerely grateful to the huge support you have given to Japan right after the earthquake and tsunami. We would like to show you the current situation of the affected areas and what we have been doing there.

Miyako City, which locates in the easternmost of Honshu, the main island of Japan, was severely damaged by more than 8 meters-high tsunami. Around 600 victims were claimed, 9,000 houses collapsed, and 9,000 people were forced to evacuate. Originally, musical activities such as wind ensembles have been well favored here; even the first orchestra in Iwate prefecture was established in this very area. JPO has cooperated with Miyako City Boards of Education to support musical activities for school children such as wind ensemble at schools which have lost many members because of the falling population after the disaster, and also newly formed string ensembles. We are planning projects for elderly people who had to move out from their original communities to the “disaster recovery public housing,” to help welcoming them to their new communities.

The tsunami also severely hit Ofunato; it was more than 8 meters high. It caused 420 dead or missing, and 6,000 damaged houses. 8,700 people were forced to evacuate. Many other cultural organizations and JPO visited and tried to cheer up the people at the Ofunato Municipal Cultural Hall, which was luckily escaped from the tsunami. Collaborating with Sanriku International Arts Festival in 2018, JPO held a concert with children who have succeeded their traditional dance-performance “Akasawa Yoroi Kembai.” Regional cultures such as festivals could be a good opportunity for making a start to rebuild communities after the earthquake and tsunami. This kind of traditional cultures should be the heart of the regions to be well reserved; however, it is often difficult to keep a tradition, because the population is falling down especially of younger ages. We would like to continue to collaborate with traditional arts and performances and show the excellence to many people.

JPO has also had many musical activities for the people in Iwate Prefecture, such as Rikuzentakata, Kuji, Yamada, and Kamaishi.

2. Miyagi Prefecture: Large gap between the areas in renewing the communities

Ishinomaki, which is located on the coast side and was nearest from the epicenter of the earthquake, was attacked by the gigantic tsunami, and the big fire enlarged the damage. Around 3,500 people were dead or missing, and 54,000 houses were damaged. In the Ogatsu bay area, the village was completely destroyed after 80% of houses and buildings collapsed by the tsunami. In Okawa area, many children and teachers of Okawa Elementary School were carried away by the tsunami; 70% of children of the elementary school lost their lives. In spite of such severe damages and deep grief, the people in Ishinomaki have moved on to rebuild their new communities for both local people and new evacuees, even invested in a new community center building, while they still have a lot of problems.

JPO have brought many chamber music performances to Miyagi prefecture: In 2017 we held a musical workshop in the Ayukawa Elementary School on Oshika peninsula, presenting a new experience to the children, and they gave us back the wonderful Wadaiko, the Japanese traditional drum performance, which is their own traditional art. We are also planning a project for Okawa area which has been designated as inhabitable, and Ogatsu area, where the people are trying to revive the community. We are considering some events at the new cultural center that will be opened in 2021.

We have also visited other places in Miyagi Prefecture, including Yamamoto, Minamisanriku, and Kesennuma.

3. Fukushima Prefecture: The meltdown, the damage and the issues after the evacuation

Fukushima Prefecture was harshly affected not only by the earthquake and tsunami but also the “Level 7” accident triggered by the tsunami at the Fukushima Daiichi Nuclear Power Station. The mandatory evacuation was ordered within 20km radius from the plant. Around 100,000 people were forced to move out from their home and communities. They had to face great many problems such as worrying about damages caused by radiation, having troubles with neighbors while seeking refuge, and maintaining their living being away from their original occupations. They now have to reconstruct their communities back at their hometowns after the evacuation order was lifted. Long-term approaches would be needed as well as the fundamental resolution of the nuclear disaster.

A part of Minamisoma is also inside of 20km radius from the plant that the people from the area were strongly affected physically and emotionally by the disaster. JPO has made several visits to cheer up the people of the entire area, helping to train the wind ensemble of Haramachi Daiichi Middle School which had performed actively before the disaster occurred, and had a concert with them for the community in 2018. The Ogikubo Music Festival and JPO have also invited the ensemble to Tokyo for several times. We will keep focusing on supporting them with music.

JPO visited Miharu, where the people had found refuge, and that led us to their hometowns Katsurao and Tomioka later to support their reconstruction of the communities. We have also repeatedly visited Nihonmatsu, Iwaki and Date in Fukushima Prefecture.

JPO continues being together with people in the affected areas to work on the problems with music. We appreciate your understanding and support to our effort.

Members of Japan Philharmonic Orchestra personally go and deliver the music to the affected areas. These members are volunteers.

How you can support

The donation money to Japan Philharmonic Orchestra has the certification which is subject to the deduction for donation by the prime minister. If you chip in with a donation, you can receive tax incentive. Click here for details. 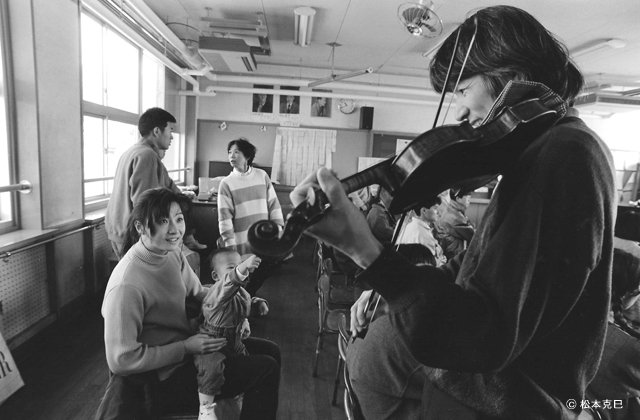 At the Great Hanshin-Awaji Earthquake in 1995, Japan Philharmonic Orchestra continued sending 63 volunteers across 23 locations in 1 year. Starting with the schools that were used as shelters, we visited hospital lobbies, temples, meeting rooms of the temporary houses and so on. On the site, many organizations including Medecins Sans Frontiers, medical organizations, co-ops, organizations promoting reconstruction with arts, town planning councils and Kobe bar association have participated in coordinating the "Bring music" activities (@Kanase Yukata) 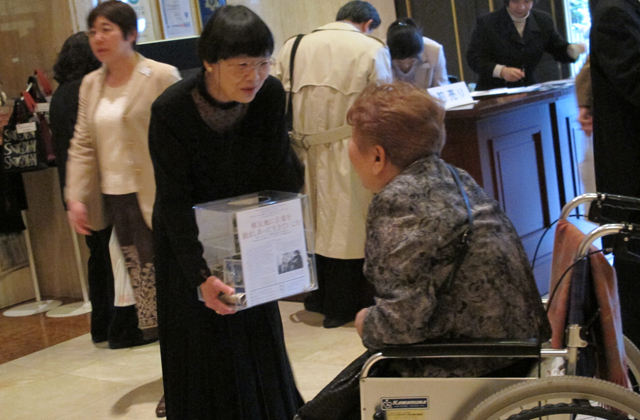 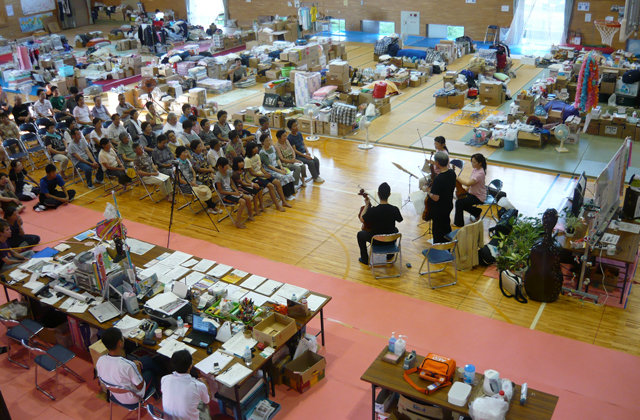